This tutorial will cover setting up an npc to sell spells as well as how to add a custom spell to the vendors spell selling list. Everything in here will be performed using the oblivion contruction set. This tutorial will be updated if I feel the need to however as with everything else on this page I will be the only one to make that call :)

The npc we will be mucking around with is Felen Relas of the Anvil mages guild. Currently he doesn't sell spells but is the guilds alchemy vendor. However functionally the fact that he is already a vendor/trainer should not make a difference here. If I end up getting proved wrong then this tutorial will get updated (if I can be bothered). 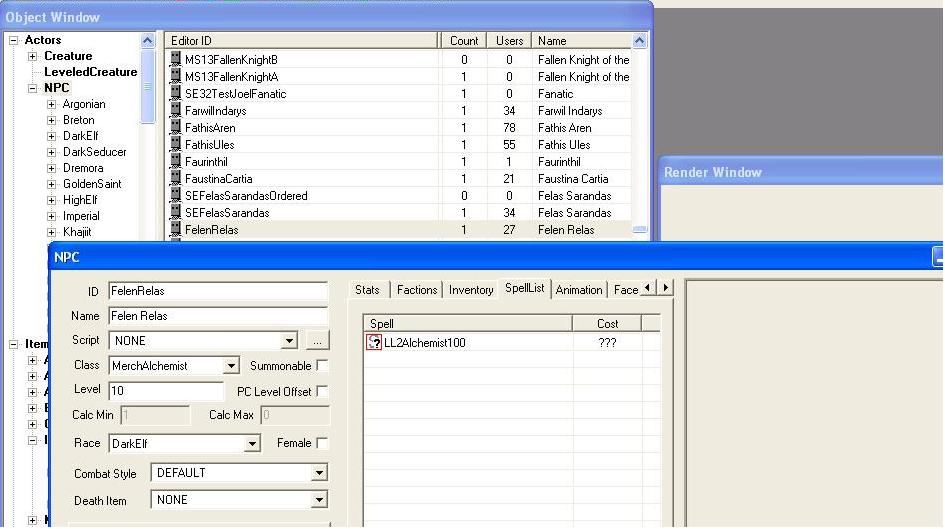 As can be seen on the above screenshot the first step is to find the npc you wish to turn into a spell vendor. All npcs are located in the NPC submenu of the Actors menu. Here we have found an opened up Felen Relas in a window. Note that we have selected the SpellList tab. 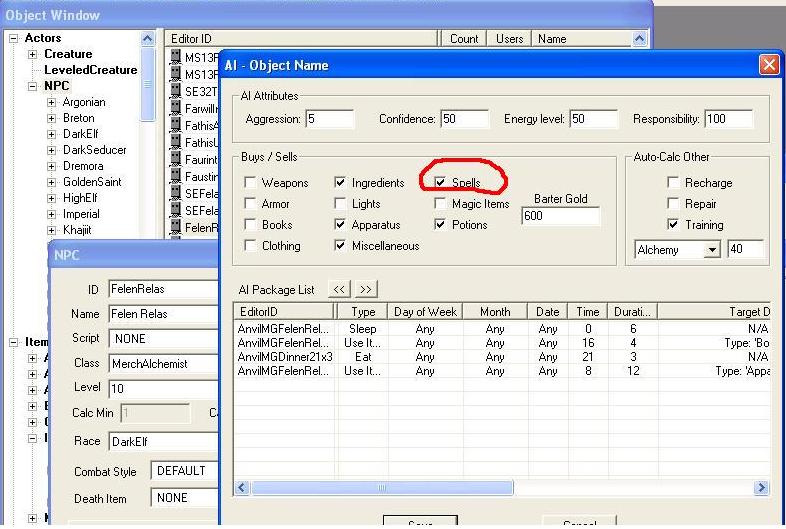 Pressing the AI button brings up this menu, sadly the the AI button got cut off in the screen shot, but it's a button clearly marked AI so I doubt you could miss it :) Here there is a option you need to put a tick in to make the npc sell spells, I have marked this option with a red circle. 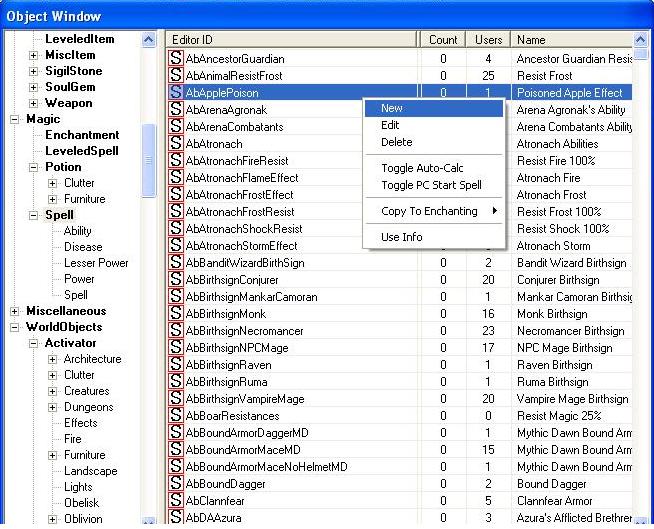 Now lets add a custom spell to the game which the vendor can sell for us. As can be seen on the screenshot above we have found the spells subsection of the magic menu which gives us a list of all our spells. To create a new spell we rightclick on the pane containing the list of spells and click "new". 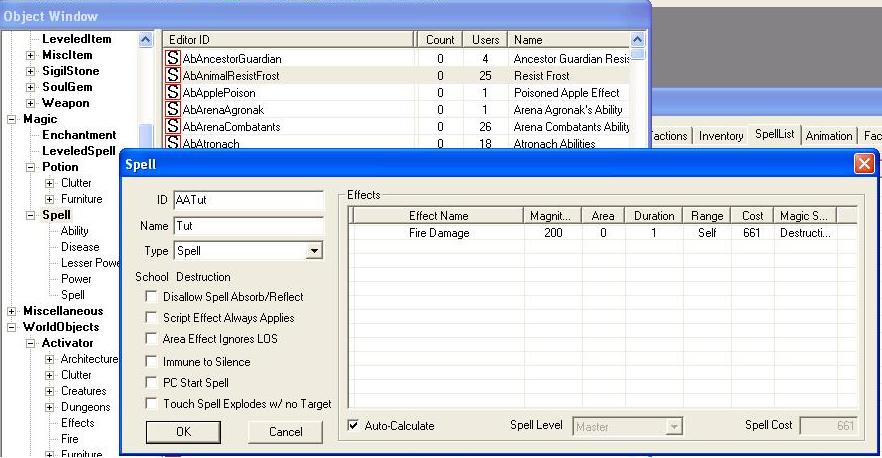 Now we have opened up the new spell menu, and as you can see I've already filled it out. If we were to click "OK" then we would now have a spell which deals 200 fire damage to yourself whenever used. To add effects to the spell you rightclick in the pane which for me now contains the information about firedamage. Several effects can be added to each spell of course. 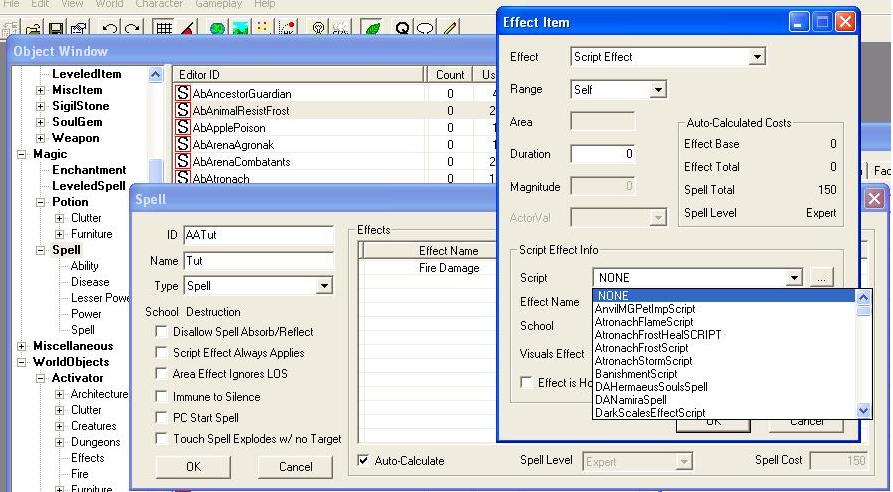 We are not going to add any scripted effects to our spell, but just to show how completely customized spells are made, I have added the screenshot above. When a spell needs to do something other then the effects already in the toolset, it will need to have a script which does what is needed. To add the script effect to the spell you rightclick as stated above, then select the "script effect"-effect and find your script. I however did not add any special scripts to my spell, and just kept it as a fire damage on self spell. 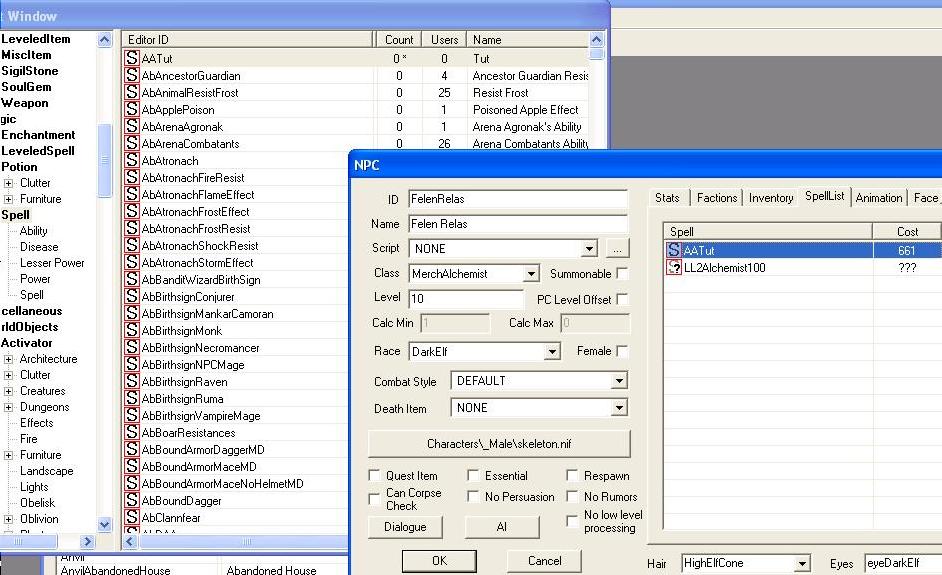 Above you can see my AATut spell in the spell list, and I have simply dragged it over to Felen Relas's SpellList tab and dropped it in. Now we should just have to save and we should be good to try and test if Felen now sells our spell. 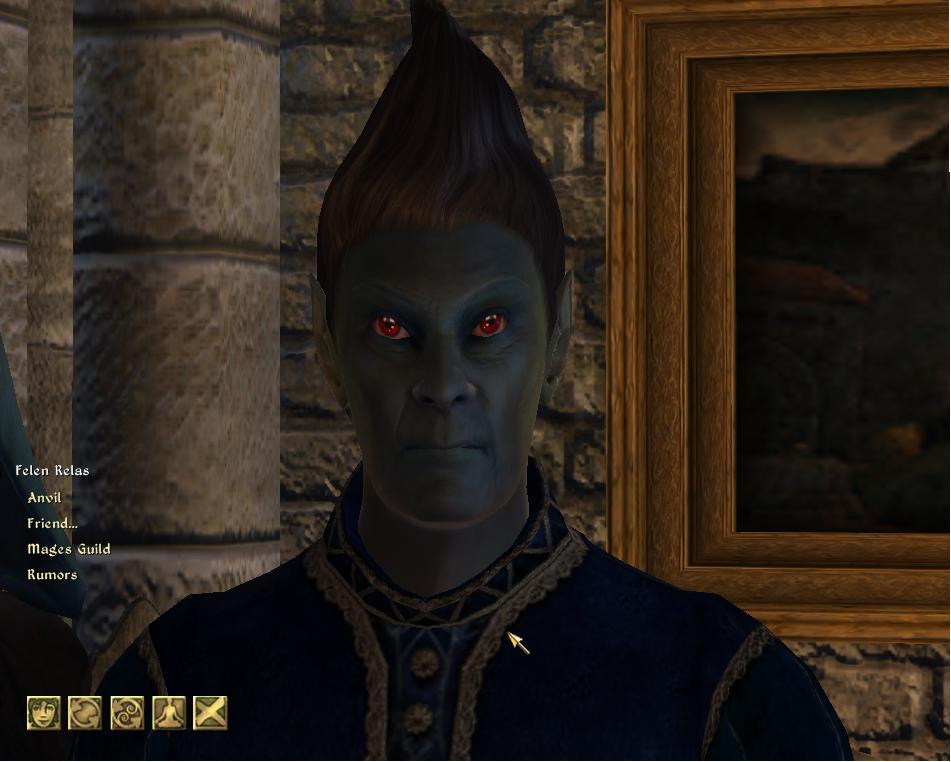 Success Felen now sells spells, and I can reveal it is the spell I added which he sells :)